Welcome to the Heart of Slovenia

The pilot area consists of eight municipalities (Domžale, Dol pri Ljubljani, Trzin, Mengeš, Moravče, Komenda, Kamnik, Lukovica), situated to the north of the Slovenian capital Ljubljana. It is located mainly along the Kamniška Bistrica river and its tributaries. The north of the region is mountainous, with the Kamnik and Savinja Alps reaching  2.558 m of height in the highest peak of Grintovec.

The area, in the past called the“Entrepreneurship area”, is nowadays part of the Ljubljana urban area and a subregion called The Heart of Slovenia. It is one of the most developed areas in Slovenia with entrepreneurship as a leading activity.

Mobility in the region

In the last 20 years, the region was affected by suburbanisation, resulting in higher demands for mobility. Almost half of the active population commute to the capital Ljubljana, and such flows of daily commuters contribute to high levels of congestion and traffic.

To face this situation, the region is committed to improve public transport by introducing new vehicles and to create new routes. 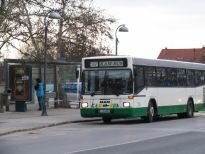 New sustainable mobility plans are needed, together with investments in infrastructure and awareness raising activities. Cooperation between all stakeholders in planning public transport is also vital.

The main goals that The Hearth of Slovenia wishes to achieve with the participation in Poly-SUMP are: